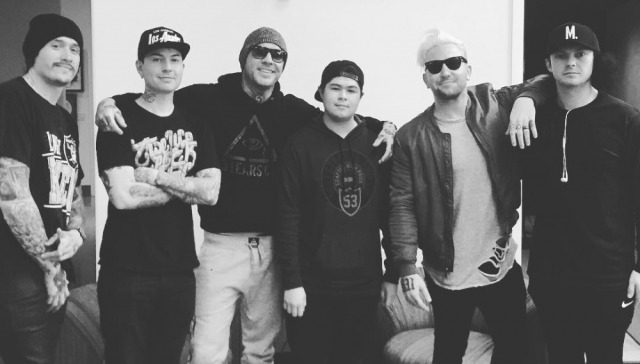 For those unaware, the Make-A-Wish Foundation is a nonprofit organization built around granting the wishes of children diagnosed with terminal illness. The organization was founded in the 80’s to grant the wish of 7-year-old Christopher Jame Greicius. Greicius had been previously diagnosed with with leukemia, and had dreams of becoming a member of the local police force.
The Arizona Department of Public Safety helped Chris’ achieve his goal, swearing him in as a member of the patrol force, tailoring him his own uniform, and letting him tag along with fellow officers for an entire day. Since Greicius, the Make-A-Wish foundation has strived to grant the wishes of thousands of minors with terminal illness, with dozens of chapters across five continents.

Last week, Hollywood Undead and Johnny 3 Tears took to social media to commemorate their time with a Make-A-Wish recipient of their own, Ruben Diaz.
Scene for Dummies reached out to Ruben to get his take on his very own personal wish come true. Ruben is a self-described fan of music and art, and is actually an artist himself. “It can be either something that they really want such as a laptop, guitar, games, etc. or the chance to meet their favorite celebrity or travel somewhere they want to go,” he explains, elaborating on the basic jist of the whole Make-A-Wish process, “my exact wish was to meet Hollywood Undead.”

All of the legwork that goes into granting the wish happens behind the scenes, even Ruben, the wisher, is caught unaware until a few days ahead of his wish being granted. “I have no idea [how the visit with the band came together], they just did their magic and my wish eventually came true. I knew a week before I met them because the Make-A-Wish people called us letting us know what exactly was gonna happen.”

The Diaz family arrived shortly before the band, after a short period of waiting they were joined by J-Dog and Da Kurlzz shortly thereafter. Ruben got the grand tour of the studio from J-Dog, “The most interesting thing I learned was what each room was for, Jorel was really great at explaining everything.” The band awarded him with a nice haul of goodies, including posters autographed by the band, 3 Tears Co merchandise, and the jacket J-Dog wore for the Notes from the Underground album shoots. Later on in the day, the group was joined by Johnny, Funny and Danny, and the gang treated Ruben to a pizza lunch in the studio (Charlie unfortunately had another engagement to attend to and could not make it to the studio for the visit). Ruben and Funny got to share their artwork with each other “we practically draw the same things.” Funny Man even adorned Ruben’s guitar with a custom drawing to go along with the band’s signatures.

After lunch, the band gave Ruben a sneak peak at music they had been prepping for their much anticipated fifth album. Since the tracklist hasn’t been finalized, there’s no guarantee any of the material will appear on the album proper, as the band typically records dozens of tracks ahead of each album before narrowing it down to a handful for the final release. “They played about 5-6 songs that might be on the next album.” While we still have no clear indication of when to expect new music from Hollywood Undead, the band appears to be making good progress on the album, “They said they're about 80% done with some of the songs.” Based on his description, it sounds like the band will continue to bring a variety of sounds to the table with their next album. “Some [songs] did [sound like traditional HU], others were a little different but they were great, they have some more heavy songs.” Regardless of the sound, Ruben has been left hyped for the next album after getting a taste of what’s to come, “I was really into the first song they showed me, I wanted to listen to it on repeat. They had the same HU flow and sounded really great, I can’t wait for them to drop their next album.”

Ruben remembers the band’s antics fondly, “While listening to the music the guys were dancing, singing along, and cracking jokes. It was great. They’re great guys, they joke around a lot and are exactly how they are in interviews.” After the new music sampling, the band signed some items Ruben had brought along for the visit, including albums and his guitar. The band and Ruben took some photos together and then went their separate ways.

We at Scene for Dummies would like to thank Ruben for taking the time to share with us about his visit, and we wish him and his family well. This being Ruben’s special day, we decided to give him the last word to close us out, “I want to say thank you to the Make-A-Wish foundation, thank you to Hollywood Undead for letting me visit them, and for them to continue doing what they do because they help a lot of people going through things in their life.”