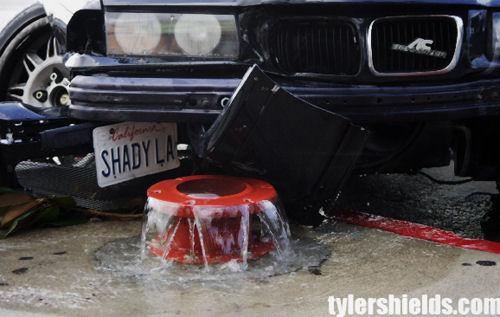 Hot off the heels of the second part of our interview with Shady Jeff, we have a special treat for everyone. In the most recent portion of our conversation with Jeff, we tackled one of the oldest urban legends surrounding Hollywood Undead; the infamous “Death of Shady Jeff” in a gruesome car accident.
Below we’ve tracked down one of the original MySpace posts that made the rounds just days after the very real, but not actually mortally-wounding accident. Well, deadly if you’re a BMW I suppose, which I assume you’re not. If you ARE a BMW though, I have SO many questions, including and probably starting with “You claim to be a car, how exactly are you reading this article?”. Literate-car-creatures aside, you can read the original post below, complete with a shot of the accident by Los Angeles-based photographer Tyler Shields.

On November 27th, 2006. Shady Jeff was in a terrible car accident. Tyler was called when the accident had happened, and was able to go to the scene of where it all happened, and snap a few photos, here is one of them below.

For those who knew who he was, you were able to see that he was a really great guy. He cared a lot about all of his friends/family/and even all of his fans. He had many great things planned ahead, he had music set to release really soon, as well as a clothing line that he just had started. It's such a tragedy to see him pass away. It still doesn't seem real. If you needed to laugh or smile, he always knew how to do that. He even gave the greatest hugs, they were REAL ones, like they meant something.
He'll always be in my thoughts and prayers.
R.I.P

Be sure to follow Scene for Dummies on social media for exciting news on Hollywood Undead and keep a look out for Part 3 of our interview with Shady Jeff, coming soon!