— Here we are at the backstage of Strand Fesztivál with Johnny from Hollywood Undead. Last year you were here at Sziget Fesztivál, do you have any special memories about that visit?

Johnny 3 Tears: It’s nice and I just went into the water but it was too cold, I’m a pussy so.

— Okay, so last year on Sziget you invited a little guy to the stage, made him dance and made him curse in English, is that what you do, it’s typical in every show or is that was just a special one?

Johnny 3 Tears: We always bring someone up, we always try a little young or an older, that makes us laugh so we always call up an old man or a younger one and it’s just like what happens every time.

— It’s been almost one year ago since you were in Hungary, what happened to Hollywood Undead and especially with you during that time?

Johnny 3 Tears: We were on tour obviously, and we’re working in studio a lot, now we are on tour but when we’ll go back, we’ll finish our new album and do the whole thing again. We’re trying to make the best album we can, personally, that’s what happened all year, I was on tour and at home, I write songs and that’s it.

— I wanted to ask you about the 5th Hollywood Undead album, how far did you go with that and what can you tell us about it?

Johnny 3 Tears: Well, we have about 14-15 songs, generally we write about 30-40 songs for an album, so I can tell we’re like in the middle of everything, there are a lot of things to do, and we’re trying to do the best we can get. We put a lot of effort in it, and we can’t wait to finish it, personally for me that’s the best part of the whole work – besides songwriting – you can add it to the live show and put for your fans. We make an album like every two years, it’s really exciting, so I’m happy.

— Usually you are playing shows wearing masks, and we can see some of them, can you imagine that someday you will play without the masks?

Johnny 3 Tears: I hope so, I don’t know, I mean the masks are part of the band since we started, so it’s hard to imagine that, but we’ll never know, we’ll see. When I’ll be older, I’ll need that mask it will cover my face so I won’t need botox.

— Is there any mask you have never worn, but you would really love to?

Johnny 3 Tears: There are those flexible gum masks which the Slipknot uses, they are really cool, but very uncomfortable because it can warm up to 70-80 C°, that must be awful, so I don’t wanna wear it, but it looks really cool.

— Where do you get these masks from?

Johnny 3 Tears: There’s a guy, Jerry Constantine, he lives and works in Los Angeles, Hollywood, he worked for a couple horror movies as well, he has been making our masks from the beginning, he always takes the cast from our faces. He makes us a lot of stuff, we wore different masks on photoshoots and on the stage and we have a few which lights up, he makes them, we buy them from him, and it’s really cool.

— What is your favorite mask from the history of rock music?

Johnny 3 Tears: Mine, yeah, by far, you know there is a few bands with masks, most likely the theatres using them, that’s when I got to like them when I saw them in the Phantom of the Opera House, I didn’t start to like them because of the bands, but because of the theatre performances. I really like the Chinese opera masks too, they were really cool, and the band ones are stupid.

— And do you have any favorite mask from horror movies?

Johnny 3 Tears: I’d have to go for Freddy Krueger’s mask because I find it scary since I was a kid, I can’t look at it.

— Did you see any good horror movies recently?

Johnny 3 Tears: A good one? Not really, I didn’t really see any good one, but I liked The Conjuring 2, it scared the crap out of me, but I don’t really watch horror movies because I can’t sleep after them. Sometimes we watch them in the tour bus, I don’t mind that because I’m close to the guys, I don’t get scared, but when I’m alone, I won’t, no way. When I’m drunk, I don’t care, I’ll watch it. I have a daughter, she watches those movies like Goosebumps, and that scares me, so… I’m a pussy as I said, I can’t go into the water, I can’t watch horror movies.

— Who will be the next president of the United States?

Johny 3 Tears: I think it looks like Hillary Clinton will be, but both of them suck so we’re kinda screwed in the States, I don’t really care, ’cause I don’t like any of them, but I guess Hillary Clinton’s gonna win at this point.

— Would you ever try a Donald Trump mask on just for fun?

Johnny 3 Tears: If I’d do that and I’d walk around like that, someone would beat me up. A lot of people don’t like him very much over there.

Watch the interview and “Dead Bite” and “City” live performances below! 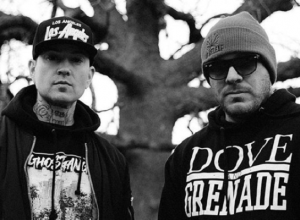