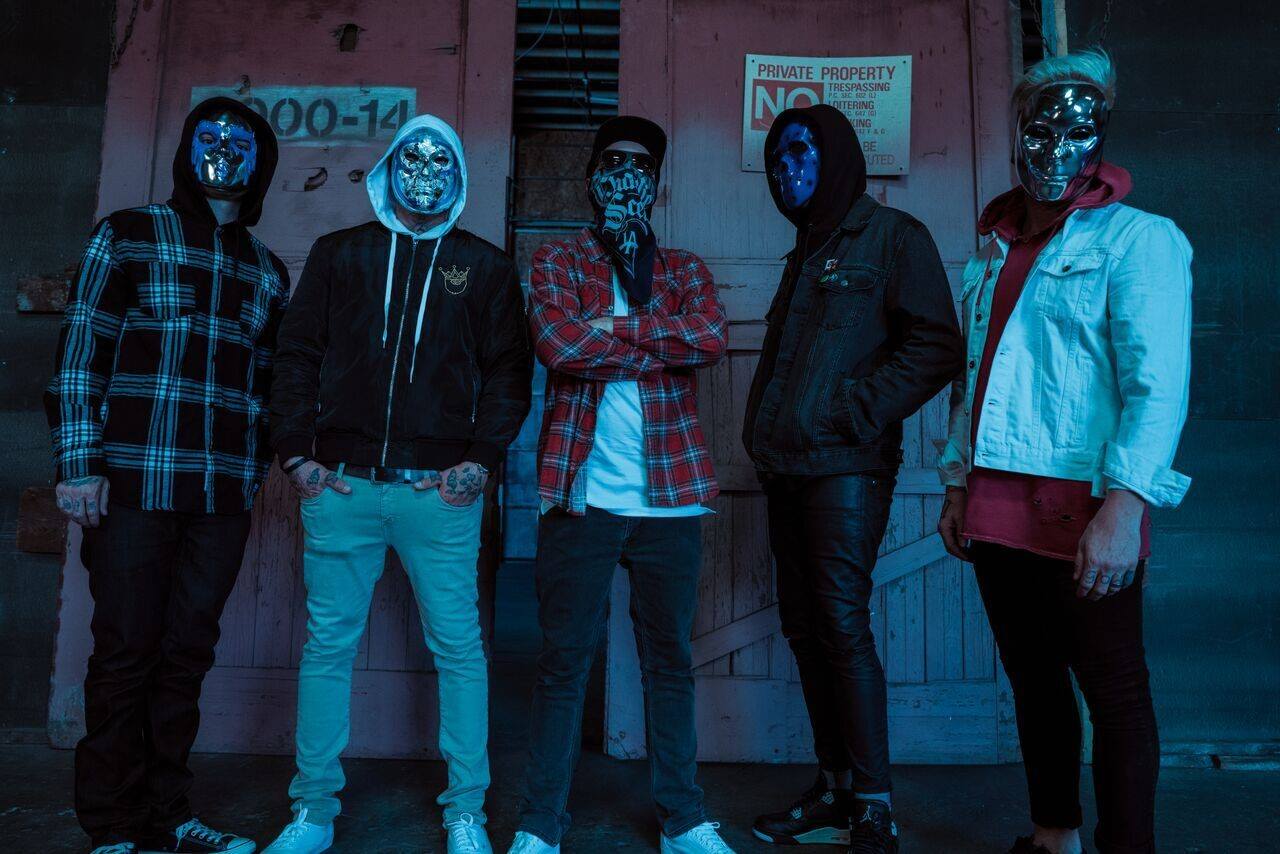 While non-album years are usually a slump for a lot of artists, Hollywood Undead continued to build on all of that momentum they built up with their first independent release, Five from Fall 2017.

The band continued touring around the world with tours in the United States, UK, Europe, and Russian territories, with a grab bag of festival shows tossed in for good measure.  The nearly year-long tour streak in support of Five lasted almost an entire year from start to finish with days off few and far between.  Even then, the band spent some of their free time in the early Spring of 2018 returning to the studio to work on music before hitting the road again for another US tour.

Hollywood Undead played their last show of the year at the end of August as part of the Reading Festival in the United Kingdom.  Not content to let sleeping dogs lie, the band announced even more dates for 2019, proving the tour machine will keep cHollywood Undeadrning into the New Year with dates in the UK, Russia, and United States.

Intent on delivering on their promises of delivering a sixth album in early 2019, Hollywood Undead closed out their 2018 with nearly a month of studio time with producer Matt Good at MDDN’s Madden Studios, before things died down and went quiet just ahead of the holiday season and a well earned rest for the group and their crew.

With a 2018 full of performing, traveling and recording the band still managed to get a batch of new music out the door.  The first new track of 2018 took a 2017 hit “Whatever It Takes” and turned it on its head.  Hollywood Undead is no stranger to remixes of their material (see 2011’s American Tragedy Redux), and the band has featured other artists on their tracks sparingly since 2005.

April 2018 saw the release of a the “Whatever It Takes” Mixtape.  The revamped track features a trimmed up chorus by Charlie Scene with brand new verses by Wu Tang collaborator Prodigal Sunn, former tour-mate Demrick, and close friend of the band Fudd Rukus.  The band even put out a new music video just for the release featuring all of the vocalists on the collaboration.  Time will tell if this release was a one-and-done or if future remixes and features are on the table, but this track will always stand out in the band’s catalog as something unique.

Speaking of features, after many teases by Loki, his track “Chicken Coop” featuring Gwen Pain and Hollywood Undead’s own J-Dog finally dropped in mid-May.  Between B-Real’s appearance on “Black Cadillac”, the already-mentioned “Whatever It Takes” Mixtape release, and this track, it seems that the band is more open than ever to collaborating with other artists.  It probably helps that there are no more label restrictions on who the band brings in to work on music with, and the individual members of Hollywood Undead are just as free to go off and work with a friend on music like J-Dog did in “Chicken Coop”.  J-Dog even made an appearance in the music video for the collaboration, which featured plenty of masks, just not the ones Hollywood Undead fans may be used to!

With multiple band members mentioning new music for Summer 2018, the fan-base was left with baited breath to see how the band would roll out new music outside of the traditional album format.  In what is probably becoming a rarer and rarer occurrence in today’s digital age, the year’s first new Hollywood Undead single debuted on a radio station under the radar in May, entitled “Gotta Let Go”.

The new single marked the band’s first release on alternative radio stations, opening the band up to a whole new audience to help grow their base.  While the band has released softer tracks in the past, this one was the first to get radio play and show off some of the band’s tonal variety that has worked so well for them over the last decade plus.  The track’s official release was followed up with a touching music video in June.

July brought what many could call the sonic opposite to “Gotta Let Go” with the aggressive and trappy “Another Level”.  The track proved controversial in many social media discussions, with many hailing Johnny 3 Tears’ substantial verse delivered mid-track as a career stand-out for the vocalist.

After “Another Level”, several months passed before the band spoke up again about new music. The track-per-month model had been changed mid-step and the band and their distribution partners BMG instead opted to release the five tracks originally intended for the Summer as an EP, entitled Psalms.

Not only would Psalms be the band’s first independent EP, it would be their first EP at all since 2010’s Swan Songs Rarities.  Psalms included the previously released “Another Level” and “Gotta Let Go” from back in the Summer, plus the three remaining new tracks that did not make it onto Five, bringing the track-list up to a nice five songs, keeping with all of the numerology from the band’s most recent album, the EP would serve as a nice epilogue to the 2017 album, with five very different songs that didn’t make it onto the original record and a fitting stylized V on the artwork for the release provided by Acrafagor.

The first new song from Psalms, “Bloody Nose”, debuted on Halloween morning on Sirius XM’s Octane channel.  After Danny teased the heavy, melodic track and dropped the name in an interview back in August, every post by the band on social media was inevitably met with demands for the track, especially after several months had come and gone without a third monthly single.  Longtime fans were especially excited and surprised to hear J-Dog deliver a rare scream-filled verse partway through the song.

A couple days later, the full EP was released on November 2nd with two more new songs, “Live Fast Die Young” and “Something to Believe”.  “Live Fast Die Young” featured a brilliant synth-filled instrumental evoking those nighttime highway drives that the genre is famous for, with a more personal set of lyrics from Danny and J-Dog, while “Something to Believe” delivered listeners with a more somber J3T track, which many felt the original release of Five lacked outside of the much more visceral “Pray”, leading many to compare the song to American Tragedy or Swan Songs-era Johnny performances.

With a ton of tour and festival dates already announced, and news of the band being hard at work on a brand new album to be released in a few months, 2019 is already shaping up to be another busy year for Hollywood Undead.  The band even shared their own thank you montage by Brian Cox a few days ago to commemorate the end of one hell of a year-

Thank you all for such an incredible year! You’re support means the world to us. See you in 2019! #UndeadArmy #HollywoodUndead pic.twitter.com/dpTbNTaVUT

Be sure to stay tuned to SceneForDummies.com as we keep you posted on all things Hollywood Undead going into the New Year!