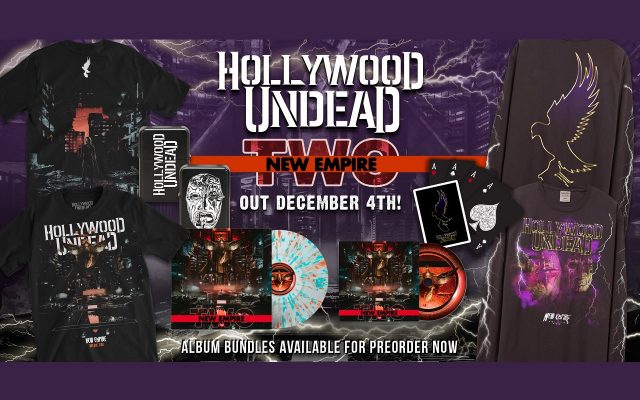 The news has been coming hard and fast this week with the release of the “Heart of a Champion” music video and reveal of New Empire Volume Two.  The official Hollywood Undead store is getting in on the action now with a huge drop of merch pre-orders for Deadbite and Volume Two themed items and bundles.

First on deck are the physical copies of Volume Two, including a limited edition orange vinyl, a regular release vinyl, and CD.  As of this writing, it seems like the limited vinyl has already sold out.  Also of note, this appears to be the only place on the web in general.

The Deadbite Raglan features the character’s mask composited with the album art, along with a band logo and New Empire Volume Two liveries.

The Shotgun Tee depicts Dead Bite with a shotgun alongside the classic Dove & Grenade emblem with head-shots of each of the band members depicted with their portions of the new mask – the exact same artwork is reproduced on the reverse in black and white.

The Lightning Tee shows some more shots of Deadbite in front of a storm, with the Dove & Grenade emblem outlined on the reverse.

The final tee features Deadbite in black and white with a large COMPARE ME TO NONE on the reverse.

Compare Me to None Tee

Last, but not least (for your wallet or otherwise!) are the bundles.  Wouldn’t be an album launch without merch bundles, right?  Each bundle includes your choice of vinyl or CD, your choice of long sleeve version of the above Lightning Tee (in a long sleeve cut) or an album artwork t-shirt, a Deadbite mask lighter, and a deck of HU themed playing cards.