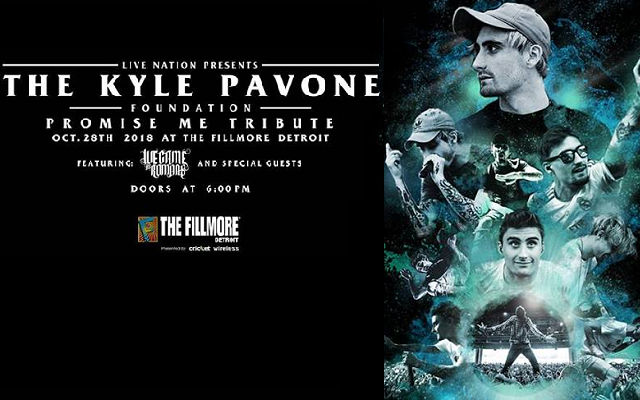 Hollywood Undead member Danny announced earlier this week that he will be performing at the Promise Me Tribute show in honor of the late We Came As Roman’s vocalist Kyle Pavone on October 28 at The Fillmore in Detroit.

The show is being hosted by The Kyle Pavone foundation and will feature We Came as Romans with other special guests.  Hollywood Undead previously toured with We Came As Roman’s for their World War III Tour several years ago.

October 28th I’ll be performing with @wecameasromans at the Fillmore in Detroit, for @kylepavone ‘s memorial show. He was so young and full of talent, I feel honored to do this. I just wish it wasn’t under these circumstances that were all coming together, Kyle will be remembered forever. My heart aches for Kyle, and his family/friends. My heart aches to anyone out there that is struggling or battling addiction or depression. Hope is never totally gone. There’s always tomorrow…No matter what your going through just hang in there. You never know how many lives you touch..hang in there. You never know where this life is going to take you or what’s on the horizon, you can’t have a rainbow without a little rain…please keep your head up my friends! anyways…Go get your tickets Now!!! Go to www.kylepavonefoundation.org for more info! Much love to all you and I’ll see you there! #kylepavone

All proceeds for the night’s events will go towards the foundation.  Fans can learn more about Pavone and the foundation, as well as purchase tickets for Sunday’s show at the official Kyle Pavone Foundation website.

The full video version of the show, as well as a special t-shirt to commemorate the event will both be available for purchase at later date according to the Foundation’s Instagram account.  See the comments here in this Instagram post by the foundation for more, plus a teaser of the shirt design below that-

Additional artists that will be joining us for the tribute: Cody Carson from Set it off Andy Leo from Crown the Empire Dan Murillo from Hollywood Undead Is everyone getting excited?

Another apparel sneak peak!! Be the first to purchase one of the Official Tribute shirts this Sunday! ***they will be available to purchase online at a later date***