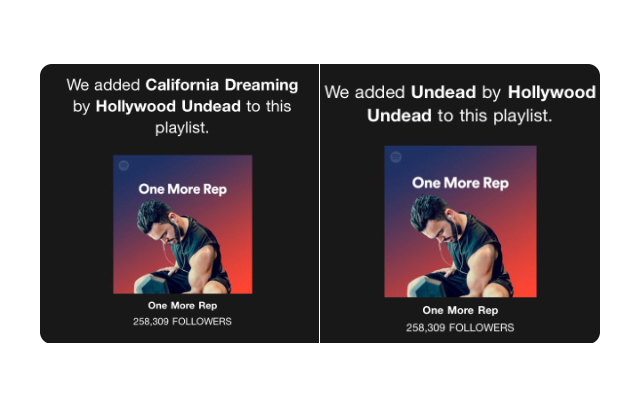 Hot off the heels of dropping new music, Hollywood Undead finds music from throughout their catalog popping up in official Spotify curated playlists once again.

The lead single from last year’s Five, “California Dreaming” leads the charge as a new addition to the Pegando Pasado Playlist.

“California Dreaming” pulls double duty this round, teaming up with the band’s radio debut “Undead” from their first album Swan Songs, with both joining the One More Rep Playlist.

Finally, while it may have rotated out as of this writing, one of the newest songs from Psalms, “Bloody Nose” also featured on the New Music Friday Playlist-

As always, these are great to see, as it means the band’s music has more opportunities to get introduced to new listeners or even older fans that had not been following the band as closely.  Here’s to hoping for more features in the band’s future!