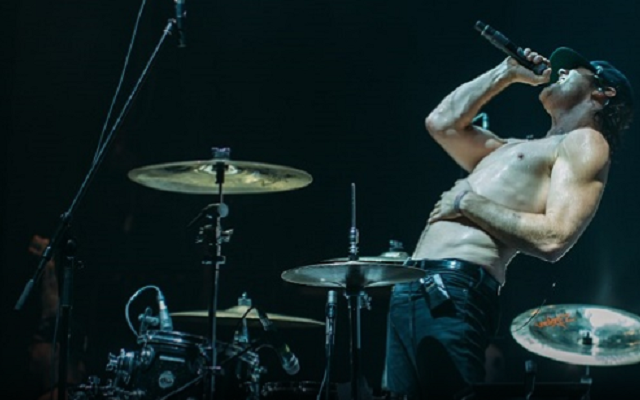 The latest touring drummer for Hollywood Undead, Matt Oloffson (who also plays in Charlie Scene’s Han Cholo and his own band, No Darling) did his own bit of press during the band’s recent run through Russia with Ksenia Yachmeneva of RockCult.ru.

Our readers who may be well versed can read up on the original interview at the official Rock Cult website in its original format.

We’ve also provided a rough automated translation below for our English-speaking audience.  While the auto-translate comes off a bit rough in patches, there’s still some interesting tidbits on Matt’s views on life, Russia, and how he met Charlie Scene, read on for more-

Let’s get acquainted with the new Hollywood Undead drummer Matt Oloffson: find out what he thinks about Russia, and do not count how many times in songs HU the words fu*k and Charlie Scene are repeated.

The first thing you should know about me is my name Matt. Matt the Kat. You can call me Jim.

The second thing? Hmm .. I love coffee! (A good habit, better than the habits of Charlie Scene.) If you understand what I mean.

I’m a foolish romantic: I love nature and long walks.

My example in life is David Hasselhoff. He did not lose his coolness even after Bay Watch. Be sure to look at him, KIDZ!

Guys, I’m also working on the No Darling project. Listen to my album After the Rain. I think this is a great cocktail of art-rock and soft lullabies. The last envelops your soul. I believe in it. I write the lyrics myself, I sing, and, of course, the drums on me. I’m dancing! This is my group, and … I can smash everything around and nothing will happen to me! Paradise, bl …, enjoyment …

Yes, so I catch Zen.

When I created the cover of the album After the Rain, I was inspired by the song of John Lennon Giving Peace A Chance, from time to time I thought about my hot girlfriend. Hell, at work I drank so much espresso that I lived in a state of psychosis. Pleasant madness.

Shock (in my humble opinion) – this is the best tool in the world! On the drums it’s hard to play fake, there are no notes. I constantly smile at the installation, this is the best way to raise my spirits.

When you take the drum set, you do not look at the surrounding circumstances. You are tired, you are sad or happy … For me the world ceases to exist. Yes, I hide behind my plates and a barrel.

My first cover is The Surfaris Wipe Out. Dedication to the father.

A real drummer is one who plays passionately! Just? Perhaps, but it is so. Although, there was one dude – Gene Krupa. He was a tough cat. And he played in a suit! [Gene Krupa is an American drummer-virtuoso, a swing star].

My inspiration … – it’s not! I try to go with the flow, live the moment. My advice – be on the alert! Do not look for idols, you are treasures, so follow your desires. And I’m inspired only by music!

I’ll have time to create another ***** (funny incident) before you say Meow.

I am a strong person, because I accept and overcome my weaknesses. Everything I achieve in my life is due to my inner core and passion. Guys, do not hide your inner fire. But remember: fire can warm, and can burn.

What happened to me when I received the news of the invitation to the group? I got a message from Charlie. I was shocked! It turns out he saw me playing at the Viper Room club with my songs. They seemed to pull me out of nowhere. All the summer long we played with the band, we hang out. I smoothly joined the team.

The atmosphere in the band is amazing! So that you understand, I feel like a floating sail. In my pockets there is a rainbow (not drugs). Just a rainbow! It’s so cool to be in a band. Hmm, really crazy to be included in the atmosphere of the band … great fans and … karaoke in Poland! So, what was in Poland – remains in Poland.

I’m grateful to fate for playing with Hollywood guys. I do not even know what I deserved. I reach my heights, I feel that my work in the group is the basis of my life at the moment.

The craziest thing that happened to me in the band was the band itself, no matter how strange it sounded. Children in a parental manner communicate warmly with fans, I consider them very humane, and it’s wonderful! It’s so nice that listeners trust their personal stories to the guys.

The song Hollywood Undead, from which the creeps … California Dreaming – a fantastic song from the album Five! I also have a special affection for the song Bad Moon.

If you’re wondering how many times in the songs HU there are words Fuck and Charlie Scene, then I’ll tell you. INFINITY +1! BOOM BOOM! Do not thank.

It’s no secret that we’re going to Rock am Ring, it’s always been my dream. The first thing I say when I get on the German land: “LET’S START A RIOT!”

I was done with Selfie! Cool, bl *! I like very much to communicate with new people who feel sympathy for what I do.

I’m in love with Russia! Damn, the Russians are such cool fans, and finally, I understood it personally! Even passers-by are very friendly guys. In Russia there is a crazy atmosphere. I felt the fire in your hearts at the concerts – it’s incredible to play in front of such a delightful audience!

The song is HU, which sounds like Russia. Riot ! Video for this song, we shot in Petersburg, and we broke away, as they could, believe me! Madness of pure water!

The strangest fan. In one of the Russian cities I was followed by a girl. To the hotel room! I introduced myself to her, and she said: “Yes, I know!” – and she began to laugh desperately. Haha, I was confused, I did not have such amusing situations. I invited her to tea. She was calm and cool, we chatted for a very long time.

Some people tell me that I have a voice like an angel.

The first rule of my life: watch your character. You should feel the people that surround you.

I think I do not spend a single second without music. This is my passion, my work and my life. 24/7 I’m in the music. I think you understand me.