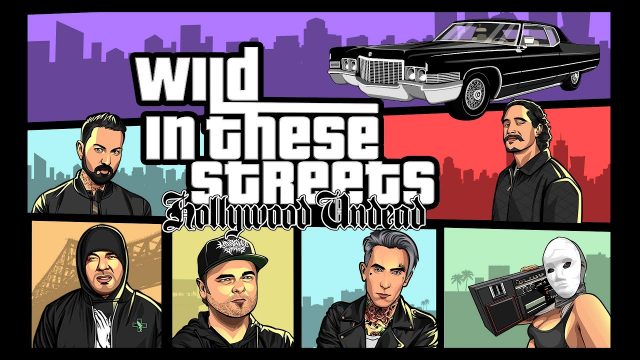 Another new Hollywood Undead release means another official press release!  Check out the latest presser for last week’s release “Wild In These Streets” below, including a line from Johnny 3Tears on the origins of the track, or stream and buy the track here from this official link.

April 20, 2022 – Los Angeles, CA – On the date that has become the band’s unofficial holiday, last night platinum-certified quintet Hollywood Undead shared a brand new track and music video “Wild In These Streets,” out now via BMG. The furious new song and stylized video gives fans a decidedly different side of the band’s new music, when compared to the previous release of “CHAOS”, both from the yet to be announced forthcoming album, this time embracing the their rise from the wild streets of Los Angeles. The video features photography from the archives of the band’s own Funny Man, arranged in a clever lyric-driven ode to a time when the band were running “Wild In These Streets”. Watch the brand new music video now, here.

On the new track, Johnny 3 Tears shares: “’Wild In These Streets’ is a song about growing up in LA when we were kids and that environment, it was like a tinder box. We wanted to capture the bleakness but also the vibrancy underneath that.”

Hollywood Undead recently wrapped up the Kill The Noise North American Tour with Papa Roach and Bad Wolves. Tickets for all upcoming dates are on sale now at www.hollywoodundead.com.