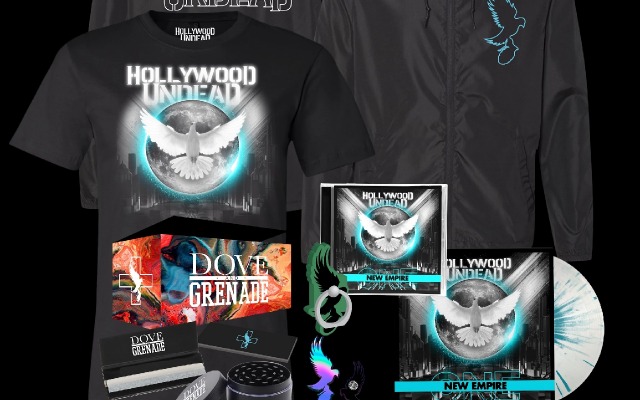 For everyone who’s been asking us about physical copies, the official store has you covered with CD’s and vinyls for the new release-

Looking to rep some new HU threads to celebrate?  T-shirt bundles including either the CD or vinyl release listed above, a new tee with a design based on the album artwork, and black tye-dye Dove & Grenade emblem socks are also available-

Looking for something warmer in February?  An alternative bundle offering features a Hollywood Undead themed wind breaker jacket with the same socks and physical media options.

Finally, it wouldn’t be a new Hollywood Undead album without an ‘Ultimate’ bundle.  For New Empire, Vol. 1 you get the t-shirt, jacket, CD, vinyl, a Dove & Grenade emblem pin, and a Dove and Grenade Industries First Aid Kit which includes a Dove & Grenade ring holder, rolling papers, and grinder.

If you’re still looking for a digital copy of the album, check this handy link.

We should note that the site has a couple disclaimers for the new merch, letting customers know that if they place orders for multiple items that their items will not ship separately and be held until everything is in stock.  International orders may also not receive their orders on release day depending on logistical hold-ups.