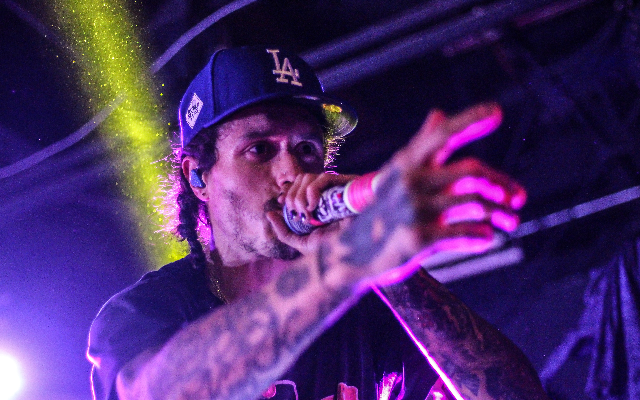 Back in 2020 Funny Man did an interview with Headbangers LA to promote the House Party livestream and New Empire Volume 1 & 2 releases from that same year.  The published version is in Spanish, but we’ve done our own hand-translation into English and reproduced for our readers below.

Of note, the interview text claims this was Danny, but based on the answers to questions (recording of songs in the pre-Swan Songs era), we’re fairly certain this is actually Funny Man – the Headbanger’s thumbnail featuring Johnny 3 Tears just confuses things further.

Check out the original Spanish text interview here on the official Headbangers LA website, or check our translation below-

Hollywood Undead is an American rap-rock band from Los Angeles, California . They released their debut album Swan Songs on September 2, 2008 , and recently their latest work: New Empire Vol. 1 and 2  They are characterized by their mix of Genre(s) : Alternative metal, Nu metal, Rap rock, Rapcore, Rap metal, alternative rock. All members of the band used pseudonyms and wore their own Mask . The band members recently decided to stop wearing them and reveal their faces. The band has sold more than 2 million records in the United States alone., and about 3 million records worldwide .

Headbangers Latin America: Do you remember your first time in a recording studio, what was that experience like?

Danny : “Of course it was in a room, a home studio, our first recording experience was to do the song, scene for dummies , right before we started working on Swan Songs ”

HL: What is the first place you would like to play, after the pandemic is over?

Danny: “Oo waooooo it’s hard to think you know, there are so many places that come to mind, but I would particularly like to go back to Mexico , it was crazy, the energy was always spectacular, plus we had a great time there. In fact, we have very good stories, the last time we were there, coincidentally the MEGADETH manager was watching us, then we ran into each other backstage, we exchanged words, we smoked, we laughed, we drank at some point in the night and without knowing how… Dave Mustaine arrived and we continued the party, it was a really crazy but amazing moment, being able to share through music in this way, the rest is history, but without a doubt for this and many things we have great affection forMexico”

HL: Let’s talk a bit about HOUSE PARTY, what can you tell us about the show?

Danny “ House Party is a show that we specially prepared, it has many interesting details to see, it’s really good so well, welcome so you don’t miss it”.

HL: What do you think about idols in metal music (bands like Metallica, Megadeth, Slipknot…), is it really killing the current scene and new bands?

Danny “Complicated, on the one hand, you see that they are selling, they have sold a lot throughout history and that is good, it is what led them to be Super bands in the scene, and this is what this shit is about. Maybe it’s not the new bands, or the new sounds, that screw up the scene, it’s a bit of everything, even those rat kids who defend more than what they know about music and that’s really what happens, it’s not that it doesn’t exist support, is that you must stand out in the industry and you will not do it with the same shit as always.

HL: What is the worst thing that has happened to you at a live event?

Danny “ (Between laughter) no no no, I haven’t thought about that for a long time (hahahahaha) , without a doubt it was the strangest, strangest and worst thing that has ever happened to me, it was shit, (we ate shit…) (hahahaha) it was one of the strangest experiences we had, in Amsterdam , the details do not have to be clarified (hahaha) please ( hahaha) .”

HL: Of the artists you have collaborated with, do you have a favorite song? Benji Madden from Good Charlotte, Kellin Quinn from Sleeping With Sirens, B-Real from Cypress Hill

Danny “Everyone has been wonderful, you know, each one has contributed a lot, and not only to us, in music in general; For me , B-Real is a phenomenal artist, absolutely wonderful and incredible. Recording with him, well, and them in general, was a unique experience. Well, don’t leave Benji or Kellin out either , they are excellent musicians and artists. They are heroes, I loved every moment of recording with them”.

HL: Would they go back to wearing the masks as before? …I understand that they stopped using them because they had completed their cycle, and they were no longer interesting

Danny “NO, it was a stage that we wanted to leave behind, we feel that it fulfilled its role, that its meaning was fully realized, they were just over 5 albums, so I don’t think we will use them again.”

HL: Would you like to compose music in another language, or do you express yourself better in English?

Danny “YES, a resounding yes, I have always wanted to compose something in Spanish, part of my family knows Spanish, my grandmother not to go that far and sometimes it is very strange to have to translate between relatives because we do not know the other language, I have I really appreciate Spanish very much, that’s why I don’t rule out the possibility of doing something in that language, even though it’s really difficult for me to speak it”.

HL: What do you like most about playing live?

Danny “Right now EVERYTHING , I really miss playing live at a real concert, the feeling that people give you, the energy you feel, seeing them, knowing that they were there for you, listening to you, seeing you, receiving their love , there are so many things that a live show gives you that really makes me miss everything”.

HL: Thank you very much for your time, finally, I’ll leave you to invite people to the show “House Party”

Danny “ You HAVE to see it, you can’t miss this show, it’s an experience that will be great, so remember to buy your ticket and see you there.”