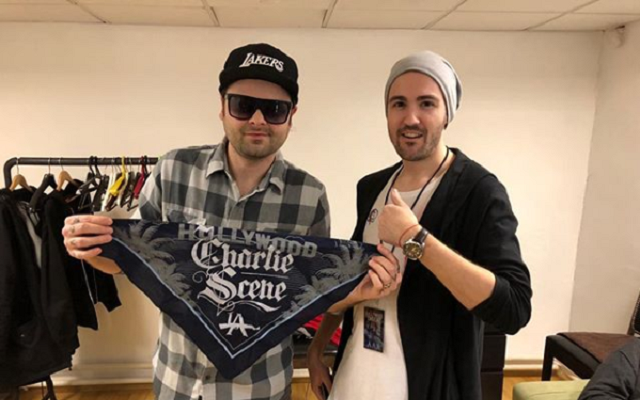 If you’ve been big into any Hollywood Undead fan pages or discussion boards, or browsed YouTube for lyric videos for HU tracks, you’ve probably seen some of noted concept artist Acrafagor’s work.

More recently, he has collaborated with Charlie Scene on creating the bandannas used for Five, designed official tour merch for the band, and even been supplying the official single artwork for the 2018 tracks “Gotta Let Go” and “Another Level”.

We got to hear a little about how Acrafagor went pro with our interview with Charlie Scene earlier this Summer, but Acra has been kind enough to work with us on translating his own blog post detailing his history with the band.  The original post and a translated version our both available at these links for our English and Russian speaking readers-
Original Russian
Translated English

How did it come to this.

As promised – I am writing this story in more detail. In general, this is what I had to tell Brian Cox when he interviewed me, but I had to cut it all down to five sentences, and the actual story is much longer. Some people think that I was somehow connected with the band initially, and at one point just somehow fell into working with them. Maybe someone has been following history since 2013, but I’ll tell you my story straight from the beginning.

I found the song “Young” quite by accident. Back then, I rarely played in the MMO Lineage 2 and I found some interesting text reading “Hollywood Undead – Young” from someone in the status space on that game and decided to copy it to the search in the audio recordings of vk.com (this is like Russian Facebook, just look at it!). At that time, I often played Linkin Park, Limp Bizkit, Zebrahead, Saliva, Offspring, Green Day, and Sum41 in my daily playlist and as you may have guessed, I really liked the song. Literally from the second to third repeat, this song became my favorite. I did not even Google anything about the band, about other songs – I was only interested in “Young”, and at that time I was happy with it. I was imbued with the meaning of the song, its mood and I was inspired.

Inspired by the idea of protest, the themes of which appear in sounds of “Young”, the DESENCE project was born, but at that moment it was called «Abiogenesis». The main essence of this project was just the confrontation between the authorities and the people. Maybe there was also a small influence from the Manezhnaya Square riot trials on the project, but I did not participate in that shit and was not its supporter. The project was immediately identifiable by several key figures in masks that used the symbol of an inverted police badge as their insignia. With this simple idea of revolution and rebellion, the basis of the story, and the narrative environment and chronology were all being built up for the project. I gradually began to collect songs for a playlist, which I associated with this DESENCE project. This process encouraged me to listen to more songs from the band that recorded the song “Young”. It was a historic moment for me. Not only did the guys perform songs with topics similar to those found in DESCENCE, but they also identified themselves in a similar way to my characters from DESENCE – guys in masks. Hollywood Undead. From that moment they became my favorite band, thanks to their songs and the shared atmosphere with my work, the idea that they were broadcasting felt like DESENCE. That year I created my famous icon, an inverted badge in the form of a skull.

In October ’12, the third album from the band, “Notes From The Underground”, was announced. I was inspired by this event. Somewhere in the Summer of 2012, I was involved in an HU themed groups on VK – formerly known in Russia as HU4Life and Newsline Hollywood Undead (since renamed after the HU resource website SceneForDummies.com). Fan-art often appeared in the news-feed there. Basically, it was usually tracing or redrawing of photos of the band (I would even say the whole fan-art community for HU was doing this back then) and I wasn’t a fan of it all. I shook my brains for inspiration and decided to create something unusual. Something that people have not seen. In December, I did a couple of test pieces of average quality and at that time made contact with Vik Winchester, who generously posted my shitty art in the community feeds.

Artworks From the Underground

In early January, I was already thinking about starting to draw portraits of the band members, but I did not see a clear picture of what this project would be yet. So, on January 9, at 2 am, an idea dawned in my head, and I started Danny’s art and, didn’t sleep at all that night. I sat and sketched a penciled concept before my own eyes. Throughout the day, I finished the drawing in Photoshop and the Danny art piece was published in the evening. I was encouraged by all the positive feedback I received from the drawing, so I decided to continue. So on January 12, Johnny’s art was also published, January 17 – brought J-Dog, on January 21 I presented art of Dylan, on January 24 came the art of Matt and at the end of the month the series completed the art of Jordon. In the process of creating subsequent drawings for each member, to my great surprise these drawings went beyond the cozy community of vk.com and lit up on Facebook. Like that, these portrait pieces scattered all over the Internet. In addition, the official band social media accounts also published these drawings and as a result they spread to even more fans in the online community. This series of works seemed to slap the fan community, and slightly refreshed the direction of fan-art towards more original content. After that, more creative fan-art projects began to appear, so I would say that my idea was to people’s liking. The song “Lion” also had its own art, which also served as an announcement for the unreleased art-book I was planning at the time. Later that year, Josh/Scrubsauce would help me and showed all my drawings personally to Charlie. You can browse through my twitter page and see how it all began.

At this point, the band knew that a fan of theirs (who knew how to drew pretty well) lived over in cold Mother Russia. Throughout the year I published various drawings, and also announced my next series project – Artworks of the Tragedy.

It’s a Day of the Dead!
I went on to study After Effects, and learned how to combine pleasant effects with useful tools and processes – during the mastering of the program I created a lyric video with pretty simple drawings based on the band’s new look for their fourth album. On March 31, 2015 I published the finished video on my Youtube channel.

On March 15, Charlie Scene knocked on my virtual door via IG Direct with an unusual proposal – to make a bandana. Jordon was looking to replace the image that he had been using with something new, with the only thing that remaining unchanged being the “Charlie Scene” text on the bandana. When I inquired about the preferred color schemes to use, he responded with a strange request, and after conferring with Vik we realized that the band members were cooking up something unusual for this new new album. Jordon had responded with “3 different color options for each show we play”. Well, that was sure curious. At the time, I immediately determined that I would start with black and white, because this is a universal option, and you can then apply any color in place of black and it will all look fine. We reworked 3 designs, gradually refining the details. So, from two bandanas, we worked our way down to one, combining calligraphy and the famous Hollywood Hills. One design, I slightly modified into a joke version and released it on April 1 for April Fools. I guess after that people probably also thought that my participation in the creation of the album was also part of the joke. Later, I discussed the idea of working on the album cover and the whole album design with the group, but at that time they were preparing songs and often replied that it was still too early. I gave them a couple of options and got distracted by my own project. After a couple of months, I again wrote to them, but it turned out that the work on the cover was already completed and my proposals were likely to go to the HU merch instead. By the way, the new Charlie Scene bandana itself was announced by me on March 24, long before the release of masks and album, but this announcement went unnoticed by the majority of the community. After a couple more weeks Jordon wrote to me again, and we discussed payment options, he offered to transfer to some account or something, but at that time I did not have anything like this and I asked him to wait while I look for options. I created an account on PayPal but after it froze, I told Charlie to not bother, I was just pleased to work with you.

On March 3, 2018, finally the story came to a logical conclusion. I was glad to see the group, and Jordon in particular. They were also very curious and happy to see us in person for the first time. I finally got to watch the band perform live, and talk with Charlie again afterwards as well. He even made a post about our collaboration in his instagram that night of the show. Brian Cox was also their filming a lot, so expect my ridiculous face to appear on YouTube too, as I mentioned in the beginning of this post. Well, now you know the whole journey and can maybe even take some insight from this story – how you can dream about something, and then look back over time and catch yourself thinking that everything is possible. That’s the main thing to do.

Shoutout to the very talented @acrafagor who helped design my bandana for this record. Saw his artwork years ago and knew he was the guy for the job. Met him in person for the first time tonight in Moscow. #hu5 #moscow #russia #ohshitnice

And this… This is already part of the history of Hollywood Undead.