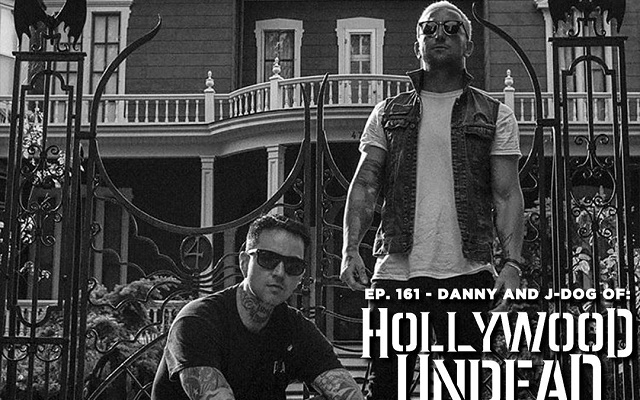 Ahead of their appearance on Instagram Live with High Times, J-Dog and Danny of Hollywood Undead called in to the Lead Singer Syndrome podcast with Shane Told to discuss a myriad of topics, including: how recording of the band’s sixth album has been going, featured artists that would be appearing on upcoming songs, what it was like for Danny to come into the band during the Vatos Locos Tour back in 2009, the status of the band’s former lead singer Deuce, and how use of certain slurs or masks may or may not have affected the band’s reputation over the duration of its existence.

The host for the podcast episode, Listen Notes, also has an auto-generated transcript that appears to have some issues but may help some international readers as well.

Fans can check out the entire episode and the transcript over on the Listen Notes website.

9:56- Working with Luke Holland on drums for the new album

14:16- How the band handles having so many song writers and vocalists

16:40- J-Dog discussing how smooth recording has been, thanks to allowing a producer (Good) take charge of the studio situation

19:11- Discussing the sounds fans can expect from the band’s new album, and the origins of 2018’s Psalms EP

24:30- Talk on how the different band members write songs at different paces

26:42- Asking Danny what is was like to come into the band when he did, dealing with fans who continue the “Deuce vs Danny” debate, J-Dog also comments on how the band had instant chemistry with Danny

30:30- The band considering the idea of dropping masks going forward in the future, a near constant topic of discussion within the band apparently.

32:30- Shane Told and the band members talk about Deuce and how Shane never meshed with him either, also mention Deuce’s recent arrest.

33:20- What it was like from Danny’s perspective moving from Lorene Drive to Hollywood Undead, and how the bands had two different sounds

34:22- J-Dog discusses the rise of emo-rap and the band’s upcoming work with Killstation

35:30- Lengthy conversation about how different genres of music can get away with different lyrical content, and the band’s use of certain words affecting the band starting with “Undead”

41:10- Mentioning Killstation, Benji Madden, and Kellin Quinn collaborating on the album, and then transitioning to High Times stream and brief mention of Dove & Grenade Industries