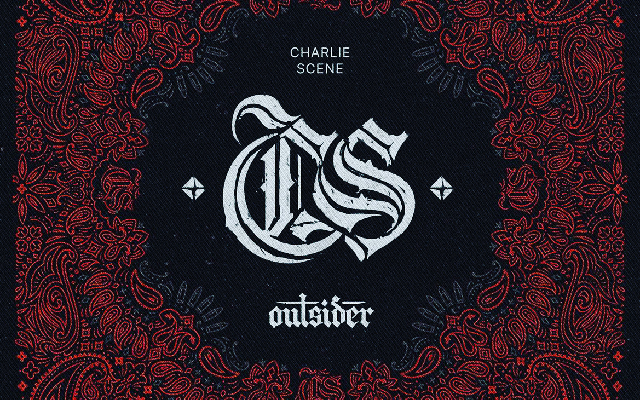 Nashville-based singer/songwriter/producer, Charlie Scene is gearing up to start 2022 off right with the release of his first full-length solo album, Outsider. After years of starting and restarting on some form of solo material, the co-founding member of Los Angeles’ own Hollywood Undead has finally set his sights on sharing a more substantial piece of himself with listeners than ever before.

Charlie Scene recounts the decade-long road leading up to Outsider: “I’ve been working on my solo project for about 10 years. I’ve scrapped the whole record and started over several times, or gave songs away to other artists. I’ve finally put together an album of 11 tracks that I feel truly represent me as an artist and touch on what I’ve been going through in life.”

Fans were treated to just a smattering of the sounds found on the eleven track collection through the release of multiple singles in late 2021 leading up to the album’s official release – including the bouncy country-party hybrid «lil Tim McGraw», the anthemic statement-maker «Kingdom», and more including the recently released «Good Mourning».

“Good Mourning is about the hard truth we face sometimes when things just aren’t working out,” Charlie describes the track. “With all the mistakes we make, the last thing we want to do is add to that list. So before saying goodbye forever, try saying ‘good morning’. It’s the least you can do.”

Co-produced by Scene himself and Griffin Boice (Black Eyed Peas, Hollywood Undead, The Saturdays), Outsider gives Charlie Scene a moment to flex his versatility both on and off the mic, and visiting recurring moments of struggling with oneself –  poignantly timed around a unique moment in history that sees so many others with similar struggles.

Speaking on the meaning behind the album’s ominous title Scene adds: “An outsider is an outcast who doesn’t fit into any circle or group of people and is oftentimes underestimated, discounted, or ignored. I’ve felt like an outsider for as long as I can remember. So this record is dedicated to all the other outsiders out there.”

Outsider drops on all major music platforms February 4, 2022, out via Charlie’s own independent label Shadow Hills Records. Listeners can pre-order the digital copy or pre-save the album now here bit.ly/CSOutsider.

Charlie Scene’s solo endeavors began in 2021 with the release of “lil Tim McGraw”, his work with Hollywood Undead has netted him numerous accomplishments including platinum RIAA certification on the band’s debut record Swan Songs. Charlie’s writing credits include some of the band’s top streamed, including hits like “Bullet”, “Riot”  and “Everywhere I Go”. “Riot”, also co-produced by Charlie, was reported as one of the top streamed tracks in all of BMG’s catalog for 2021 in a recent earnings call. Scene has also worked with numerous other artists across the industry, including reaching #1 on Active Rock Radio with All Good Things on last year’s “For The Glory”, and hitting 1 million plays in under a single week on the track “Shadows” with Dutch duo Blasterjaxx.