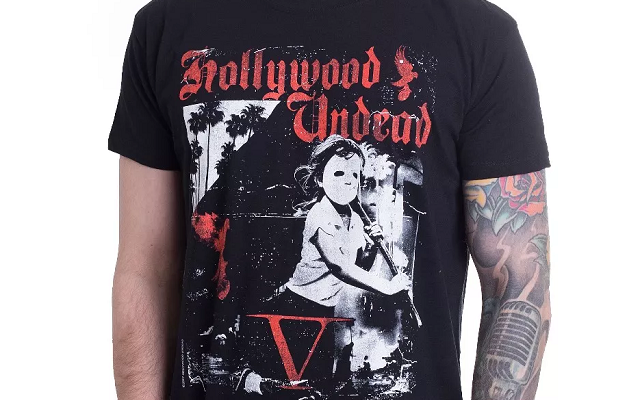 Merch giant Impericon has updated their site with a new Hollywood Undead t-shirt, which is labeled simply as “LA Riot T-Shirt”.  While this might seem like a tie-in to the band’s track “Riot” off of last year’s Five, we think that’s probably more coincidence than confirmation that “Riot” is slated for single or music video status.

Like many pieces of HU clothing this album cycle, this one features the V logo and album art with some stylistic changes to give the street scene up a bit for the “riot” theme, rendering the design in black fabric with red and white print.  Surprisingly, the band logo once again uses the same font seen on American Tragedy Redux.  This version of the band logo most recently showed up on a new hoodie design back in December, also sold by Impericon.

Interested fans can grab the shirt from the Impericon site.