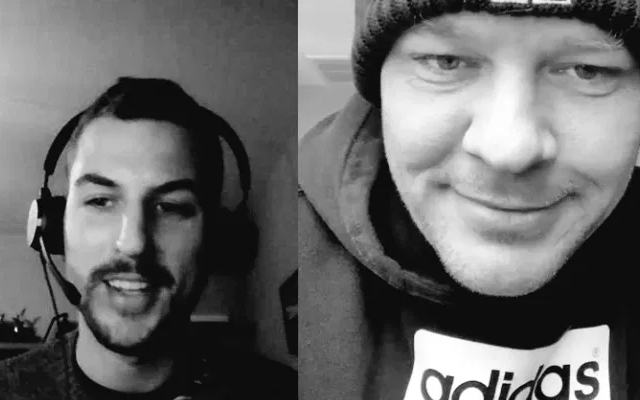 Back at the end of 2020, Clément T. of French music site Pozzo-Live.com got a chance to catch up with Johnny 3 Tears – discussing the Hollywood Undead House Party, Los Angeles Dodgers World Series win, and more.  Our French-fluent readers can read the interview in its entirety from the original source here, we’ve reproduced an auto-translated version below for English speakers-

This holiday season, and a few hours before their House Party, Pozzo Live had the pleasure of chatting with Johnny 3 Tears, bassist and co-singer of Hollywood Undead. The opportunity to talk about the event, the double album New Empire, Vol.1 and Vol.2, and to learn more about Johnny and especially his love for the Dodgers, baseball icons.

Johnny 3 Tears: It’s going really well, even if I’m a little tired because it’s early (editor’s note: 8:00 a.m. in Los Angeles / 5:00 p.m. in France at the time of the interview) and we have been preparing tonight’s big party for several days and it’s work. But it’s okay, I’m ready to party!

PL: The last time I saw you was in February 2018, in Paris, and I was happy to see you again last March. Sadly, covid-19 came along and the tour stopped. How did you experience this rather special year 2020?

J3T: Dude, it was a crazy year, a crazy year, for everyone! Frankly I was disgusted and upset that our tour was stopping, although I fully understand the reasons. I’m the optimistic type, you see, I always try to find the positive in a situation that was initially negative, so I got back to working, making music and doing what I know and what I love. to do. I focused on the little things of everyday life, because that’s about all we could do. But frankly I hope that this will all be over soon because it sucks that you will no longer be able to play on stage, go on tour, but also more simply not to be able to go to the movies or the stadium. I hope to return to normal life as soon as possible.

PL: I like to use interviews to discuss people, their passions, and what they are and do outside of music. I follow you on Instagram, and you seem like someone very close to his family. But beyond that, what do you spend your free time on? Who is Johnny outside of Hollywood Undead?

J3T: Clearly, family is super important to me. Besides, I write a lot of music, of course. For Hollywood Undead but also my own music, just for me. This is what I spend the most time on. I also like to go for walks, to go to the shooting range and especially to read, sometimes for several hours a day, as long as I don’t watch TV and I only go online. To me it poisons your mind more than anything else, all of it. Ah, I also have a cannabis plantation of around 650m² that I take care of when I have some spare time. Oops ! (Editor’s note: personal cannabis cultivation and consumption are completely legal in California)

PL: Speaking of passion, I saw you were a Dodgers fan, too! I’m not too familiar with baseball, more like US football, so can you tell me a bit about that?

J3T: I grew up near Dodgers Stadium, actually, so that’s a long story! I’ve always been to games. Today we can’t anymore, because of the covid, and it’s really sad, especially since this year, they won the World Series (note: the equivalent of the Super Bowl in baseball) for the first time in more 30 years old! I try to go every now and then, but I’m still very busy and can’t go as much as I would like. You know, baseball is a sport apart, in the USA, by culture but also by the game itself. The games are really long, sometimes 4 or 5 hours, so going to see baseball is really spending a whole day at the stadium, with your friends, hot dogs and beers. It’s addicting, but it’s really cool!

PL: Before talking about New Empire, I wanted to talk about the House Party tonight. How did you come to this idea ? And how is it going to happen?

J3T: Actually, Hollywood Undead started out as a house party band. When we started, we only played in this kind of event. We would sit in the living rooms, set up our instruments and our booze, and we played all night drinking in the midst of people. So this House Party is really a homecoming, a desire for us to go back to the origins of the group. So we built a living room in the studio, we invited people, and we decided to have a fun and cool time, to offer something different from the usual concerts, that in addition we do not can not do at this time.

PL: I saw that you invited Ice Nine Kills and Jacoby Shaddix, from Papa Roach, with whom you did the feat. by Heart Of A Champion. Will there be other people?

J3T: We simply invited our best friends, but no more, because due to covid-19, we couldn’t invite everyone, fans included, and end up with hundreds or even thousands of people! But the event will be live streamed so everyone can participate, even remotely! Welcome to you, man!

PL: Alas it will be 4:00 am in France so I will sleep, but otherwise I would have been happy!

PL: Let’s talk about New Empire now. Firstly because an album in two parts separated by several months is quite rare, and secondly because this album was really presented as a reinvention, as something new in your career.

J3T: I guess the time had come to do something new and different. When you go to the studio, you usually think back to what you’ve composed in the past and you build on albums that have already been released. You often say to yourself “wait, that we have already done”, “we have not tried this yet” or “what we did there sounded good” … etc. And we wanted to break this approach. We looked at each other and we were like ‘hey, let’s pretend this new album is the first one, and let’s start from scratch’. We started to compose but ended up with a lot of songs. Too much for one album, actually, except we didn’t want to limit ourselves to ten or twelve tracks in our creation process. So the decision was made to make a two-part, two-part album, to put everything we had composed into it. After that, they should normally have been released closer in time, but the covid delayed the release of volume 2 for a few months.

PL: Frankly, I can’t wait to see it live, especially with your friends from Ice Nine Kills and Papa Roach. Unfortunately, for the moment the virus is still there and it seems that the resumption of concerts and tours is not here. So what are your wishes and your program for 2021? What can we wish you for the new year?

J3T: Who knows, man ?! I’d love to go on tour again, but I doubt we’ll see any touring restart before 2022, to be honest. So we’re going to meet again next spring to start working on a future album, and that’s about it for now. Touring is a big part of our time, and no one really knows when it will resume. You, like me and like everyone else, we just have to wait and see what happens in the months to come. Hopefully things will change for the end of 2021, but I’m not sure.

PL: While waiting for you to come back to France or release a new album, who can you advise us to listen to or even interview?

J3T: Well you should try Ice Nine Kills. Spencer is a great guy! And they are really good. If you have the chance, also try to get Chino Moreno from Deftones. In another style, there is a German singer that I like and who is in feat. on New Empire Vol. 2 it’s GhØstkid, who was previously with Eskimo Callboy.

PL: Ah that’s funny, we just interviewed Eskimo Callboy a short while ago! They too are really cool, aren’t they?

J3T: Yeah, I like it a lot too. They’re crazy too, but what they’re doing is really cool.

The live stream concert on the occasion of the House Party

J3T: I’ll say “Paul McCartney“. I love Eminem too, but you know, anyone who plays rock has been influenced by John Lennon and Paul McCartney. Without guys like that metal wouldn’t exist. We owe them a lot.

PL: Thank you very much for this interview, and I hope to see you soon on European stages, starting with France! We cross fingers !