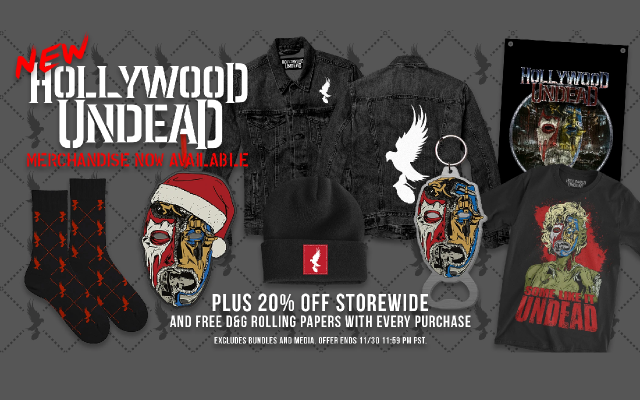 Not to be left out of the holiday shipageddon going on right now, the official Hollywood Undead store has been busy adding a bunch of new merch lists over the last week, as well as kicking off a sale of their own.

All items storewide (excluding bundles and media as per usual) are sitting at a sweet 20% discount, with a free batch of Dove & Grenade rolling papers in every order, but act fast because the deals end on Cyber Monday at 11:59PM PST.

The next piece of apparel is a reference to the Marilyn Monroe film Some Like It Hot of all things, featuring a zombie complete with Dead Bite’s mask and its own Monroe aesthetic, with a red D&G emblem on the reverse.
Some Like It Undead T-Shirt

It wouldn’t be Winter here in the Northern Hemisphere without another new HU beanie, this time with a red and white D&G patch.
HU Patch Beanie

Another recent staple for merch drops, this round brings us yet another new design of socks.  This pair feature more red D&G emblems on black fabric.
Dove Pattern Socks

While we’ve featured a number of Hollywood Undead flags from other merch stores, this is one of the few that’ve ever been available from the official store.  This 36″x48″ flag features the Dead Bite mask imposed over the New Empire Volume Two album artwork.
New Empire 2 Wall Flag

This year we’re also getting treated to our first new Christmas ornament in a while.  Again featuring Dead Bite, but with a bit of festive flair this time around.
Dead Bite Ornament

Finally, because we didn’t have a chance earlier this month, the store also dropped a five pack of official face masks, no not those kind of masks, those kind.  As of this writing the five pack has already sold out, but with the pandemic continuing to be a thing for the foreseeable future in some parts of the world, there may be a chance for these to come back with their strong sales.
HU Band Face Mask Set 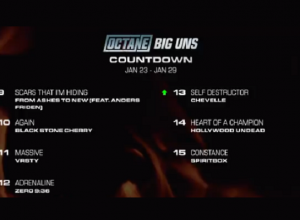