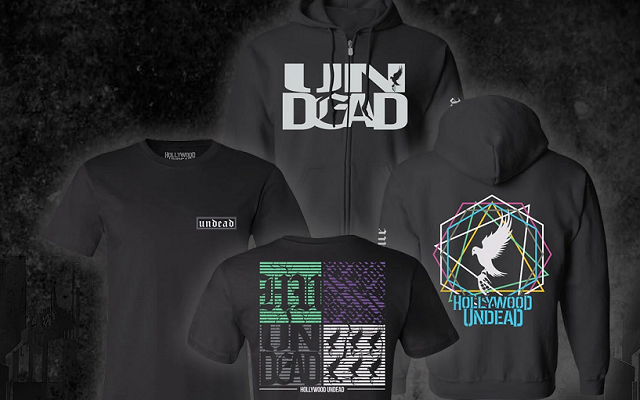 The official Hollywood Undead store has updated with preorders for a new hoodie and t-shirt based around the New Empire Volume One art style.  Both designs were previously available for sale on the 2020 European Tour, but now fans all over have a chance to get their own whether they could make the shortened tour or not.  The store is currently taking preorders for each, with expected ship dates for next week, any orders that include other in stock items will be held until the new merch is ready to go as well.

The first item is a new zip hoodie with UNDEAD emblazoned on the front, with the “Build x An x Empire” sleeve print, and a stylized HU with Dove & Grenade logo on the reverse.

The other piece is a new t-shirt featuring an undead logo on the front, with four squares of static with band themed imagery on the reverse.