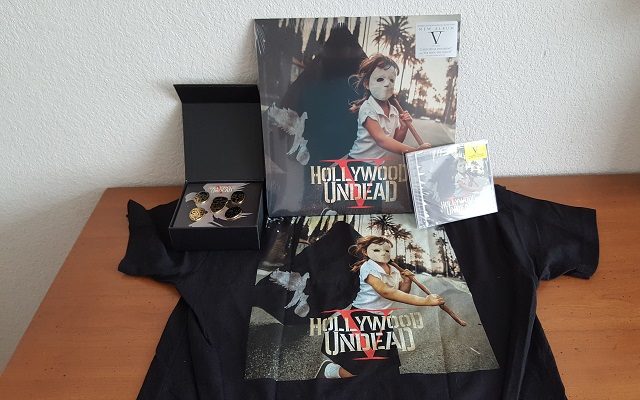 We here at Scene for Dummies were fortunate enough to get one of our V Ultimate Bundle pre-orders in the mail yesterday.  We have grabbed a few pictures to let other fans who haven’t received their’s yet know what to expect or to let the more on the fence buyers get a better idea of what they’d be paying for.

Our entire bundle showed up in a single large white packing envelope.  The package was dispatched via DHL (an alternative to UPS/FedEx, etc.), but was finally delivered by USPS during the last leg of the trip.

Inside we’ve got a plastic wrapped shirt and three boxes.

We’ll start with the shirt.  Decent quality, and a little more black than the camera is showing here.  A small Hollywood Undead V logo adorns the front left, with a LARGE print of the album art on the back.

Remember to take care of your printed tees and always check the labels here!  We were a little concerned about the size of the print on the reverse of this shirt, but the instructions suggest washing inside out, likely to help preserve the print as it swirls around with other types of clothing in the wash.  The band’s logo takes the place of a brand name or tag here.

Onto the first box!  No big surprise here, this one is obviously for the CD before it even gets opened.  The sticker calls out the oldest and newest tracks released off the album, “California Dreaming” and “We Own the Night”.  A little out of focus, but it is nice to see the band’s Dove and Grenade brand logo next to BMG (the distribution partner the band used for Five).  Hooray for going independent!

Last box, which by process of elimination is also obvious now!  Since we’ve opened everything else, all we have left is the pin set.

The pins come in a nice matte box with a gold foil dove and grenade.  The mock-up on the website suggests the box was meant to be a slip-cover style like you see for DVD’s, etc. but the final product features two magnetic clasps, which give that nice snap when you close the box.  The gold foil has a bit of a worn or damaged effect to it, not sure if this was intentional (or partly intentional) or some wore off in the packaging/transit processes.

The pins are much larger than we were expecting.  At least the size of my thumbprint if not larger for Charlie’s.  The pins are based off of the black/gold set of masks from V, with black paint on brass.

The fasteners are black plastic, and attach the pins to the paper Dove and Grenade/HUV insert inside the box.

Yes, we tried, and no, the CD does not also fit in the box.  Not an advertised feature but it looked close so we had to know!

Overall the real draw of the set is the pins, as you can get the rest of the merchandise individually or in smaller bundles in the case of the T-Shirt.  If you’re after a Five themed shirt and already plan to buy the album in multiple formats this is a no-brainer.  The pins make a great display piece and we can easily see fans wearing this around to shows and putting them on their backpacks, etc.

Since the new store went live, there’s even more options for bundles now, including an even bigger version of this bundle including an autographed copy of the upcoming HU Origins comic book.  You can shop all of the Five purchasing options on the official Hollywood Undead store.

If you put your pre-order in prior to this post, look out for a shipping email soon, as orders of all kinds seem to be hitting the mail over the course of the past week.