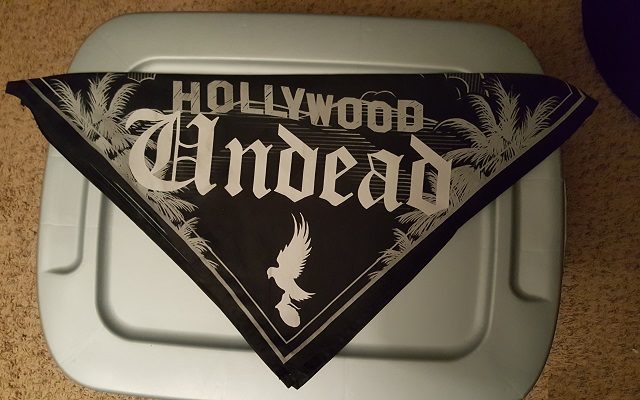 We’ve had a lot of requests for information on the difference between the various Hollywood Undead bandannas that are available right now.  Thanks to the help of a few fans we’ve been able to compile some nice images that show the differences for everyone.

The first bandanna is the standard tour bandanna, which can be purchased right now from the band’s merch table if you’re attending any of the concerts this year.  No word yet on if this bandanna will continue to be available for the European tours in 2018.  This bad boy will set you back $20 USD.  One half features the Hollywood sign in the hills with palm tress and a stylized UNDEAD with the Dove and Grenade logo.  The other half features an Undead banner coming from the clouds with bullets and an HU logo, along with the logo for designer Acrafagor.

The second bandanna is available to Gold and Platinum VIP buyers, and is included for free with your VIP purchases (prices vary).  Again, no word if this will be the design for the European VIP shows.  Both halves are symmetrical and feature the same images of the band’s masks as used in the Ultimate Bundle’s pin set in black and gray, along with various Hollywood Undead, V, and Dove & Grenade logos all arranged in circles/squares around the center.

The final bandanna is available with the Best Buy exclusive version of the new album Five.  Special thanks to our followers @theund3adgod, Jayson Servin, and Joshua Stewart for their photos.  One half of this bandanna features the same bullet rain effect with additional lines, but now features the Dove & Grenade logo and no designer logo.  The other half is again, very similar to the tour bandanna with the Hollywood sign and hills, now with an Undead banner and HU logo at the bottom.  The print also appears to be slightly smaller than that of the tour bandanna, but the assets all appear to be the same, just shuffled around.  So if you can only make it to a show or only make it to a Best Buy you aren’t missing out on too much.