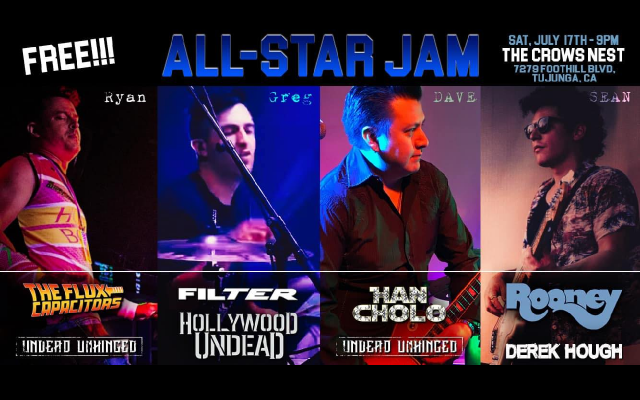 Here’s a quick bit of news for our Los Angeles-based readers.  Tonight at 9PM The Crows Nest Sports Grille will be hosting the Han Cholo All Star Jam, for FREE.

Rios is a mainstay member of Han Cholo since its inception, and recently played guitar on this year’s Undead Unhinged livestream with the rest of Hollywood Undead during their acoustic set.

Greg Garman is the current touring drummer for HU, having also played for acts like  Filter and Selena Gomez in the past.

Silverberg was also the original key player for Han Cholo, later providing production assistance for the band’s performances after his intial departure and currently plays for The Flux Capacitors – like Rios, Ryan also played keys on the recent Unhinged set.

Finally, Sobash is the latest bass player to join the mix, having played for Rooney and Derek Hough, among others.

So, if you’re looking for something to do tonight in the greater Los Angeles area – be sure and get yourself over to The Crows Nest for this super lineup!