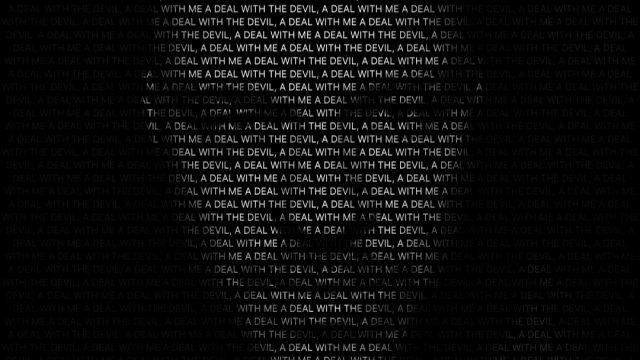 So, earlier this morning Johnny 3 Tears took to Twitter to comment on some of his frequently used phrases in his lyrics, including the notorious “deal with the devil line”, which has reached meme-tier status in certain corners of the greater Hollywood Undead community over the past year.

That’s exactly how this fun, tongue-in-cheek – yet potentially deadly serious investigation kicked off and took us down a rabbit hole of potential demonic paperwork.  Per request from the man himself, let’s walk through J3T’s legal issues with Señor Diablo.

Our first ever evidence of Johnny 3 Tears’ business relationship with the devil himself can be found on the band’s debut album, Swan Songs, on the second track entitled “Sell Your Soul”:

They want blood and they’ll kill for it, drain me and they’ll kneel for it
Burn me at the stake, met the devil, made the deal for it

At this point we can establish Johnny has indeed met Satan, and the two have entered into an arrangement – whether the track’s title and engrossing subject matter are related are left up to listener interpretation at this stage in the timeline.

Probably the most titular evidence comes in 2011, with the release of American Tragedy, and that album’s eighth track, “Glory”:

A deal with the devil is a deal with me
That deal is forever, as long as you breathe

Where’re we at here?  Is George claiming to be the/a devil, or has he somehow got power of attorney of Lucifer?

Fast-forward to 2013, with the heavy hitting “We Are” off Notes from the Underground.

I’m married to the devil
in the city of angels

The lyrics don’t mention the deal, but some may argue marriage can be a deal of sorts, and its also a legally binding contract in certain jurisdictions.  The plot thickens…

Going straight to 2017, Johnny mention this in “Black Cadillac”:

Got the gadgets all wrapped, devil hanging in the back

We’re not sure if this is a flashback to the wild Undead-style party that the group may’ve had that night leading into the initial deal mentioned in “Sell Your Soul” or not.  If it isn’t a flashback, then the duo are still on good enough terms to be cruising together.

Are you sure you wanna be like me?
Gotta pay up, nothing is free
A deal with the devil, a deal with me

No new info here from the line itself – but this “deal” had some sort of cost associated, probably not a monetary one though…probably.

Next year things go really supernatural. “For the Glory” with All Good Things comes in with the next mention of the deal:

Out from the ashes, the cradle to the grave
Made a deal with the devil, it might’ve dealt some pain

Just a few months later another piece of evidence comes in the form of a collaboration with From Ashes to New, “Bulletproof”:

You lie to yourself, now you feel betrayed
Made the deal with the Devil, played God for a day

Sooo… part of the deal meant J3T got to experience Godhood for a bit, unless this line is just a metaphor, which this whole list is very likely to be, but we can’t stop investigating yet – we’re too deep now.

So, we can say for sure it was at least five deals has been made. In the latest installment of Hollywood Undead catalog, this year’s Hotel Kalifornia.  The track “Reclaim” almost seems to give the listener a warning to not go wandering down the same paths-

The dеvil wants his due, sad, but it’s true
It’s written in blood, the devil wants you

Finally, Wikipedia notes that the devil of Abrahamic religions goes by many names across various cultures and religions, including Abaddon.

“Revelation 9:11 describes Abaddon, whose name is translated into Greek as Apollyon, meaning “the destroyer”, as an angel who rules the Abyss.”

Now where’ve we heard that last bit in relation to J3T before? So, what’s the conclusion?  Don’t do deals with devils, kids!

…or DO!  We’re not here to teach you, just cover the data.