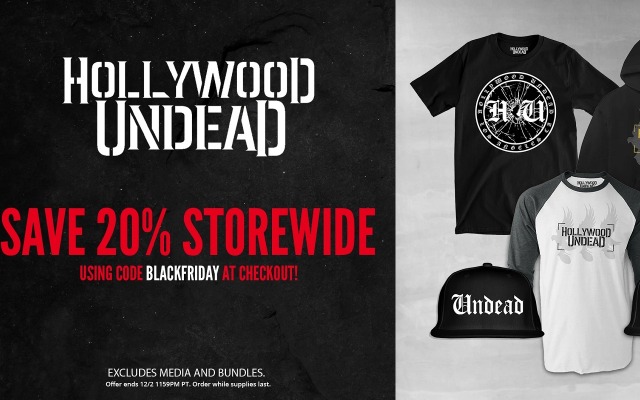 The Official Hollywood Undead Store has added even more savings for your holiday shopping.  In addition to the promo code BLACKFRIDAY we covered previously, which nets you 20% off your cart on most items at checkout, the site is now offering free domestic shipping within the US.

The band Twitter account also alluded to BOGO deals, though we have yet to find any on the site.  Some older merch listings from the Five record cycle, like the V Snapback, are now showing as sold out, so the buy one get one offers could have applied to that merch specifically and it sold out in a rather short window.  It’s also possible additional BOGO deals may go live on Cyber Monday, or the Tweet could have been scheduled and was posted with old/incorrect information.  We will try and post an update if the current deals on the site change.

Trying to get your order in time for the holidays?  The store has also updated with a handy shipping guide-