The first hints of a live DVD came out of a contest held in late 2009 by the band’s management.  Lucky winners would get the chance to attend shows in either Albuquerque, New Mexico or Tempe, Arizona where Hollywood Undead would be filming something special. The candidate shows ended up being the last two dates of the TCB (Take Care of Business) Tour, and the assembled footage would culminate in the very first (and as of this writing, only) DVD of a live Hollywood Undead performance. The final version of the live DVD spliced footage of the two performances together, with intermission segments featuring band interviews and cameramen following the band members around venues before their performances.

Around the same time, A&M/Octone, the band’s primary record label in major regions requested that the band record new music to be included as part of a 2-disc release at retail and digital bundle for e-tailers like iTunes. The lead track, “Dove and Grenade”, was released exclusively on the band’s MySpace for streaming. The track featured the band reuniting with famed producer and Swan Songs alumni, Danny Lohner, and features an instrumental from Puscifer’s “The Undertaker (Renholder Mix)”, released in 2006 as part of the Underworld: Evolution soundtrack.

All was not calm in the house of Undead however, as hints of founding member Deuce’s separation from the band stem from the recording notes of this “Dove and Grenade” and the rest of the compilation’s contents. While the rest of the band laid down vocals at Danny Lohner’s studio, Castle Renholder, Deuce recorded his vocals elsewhere in his own studio. A second new song was recorded, entitled “El Urgencia” , featuring no collaboration on Deuce’s part, with Charlie and J-Dog instead taking the reigns for the chorus. The DVD footage ends with a final interview question for Deuce, with him declining the idea of recording any covers, instead preferring to work on new music. In retrospect, this final clip heavily foreshadows the growing rift between he and the rest of the band.

The final CD also included three covers of band-favorite songs, with Deuce conspicuously absent from all of them. The remainder of the CD was padded out with a rock remix of “Everywhere I Go”, with additional production by Danny Lohner to make the track more rock-radio friendly, and live versions of Swan Songs tracks with audio captured from the two shows. The cover art itself, featuring the band assembled before a stylistic American flag background, is actually an edited image of a group photo of the band from earlier in the year. When approached about the subject in 2015, J-Dog commented that the entire compilation was assembled under “heavy label pressure”. Between low budget graphical design, label directives, and the rag-tag collection of music present on the CD, it’s no wonder the collection was dubbed Desperate Measures. 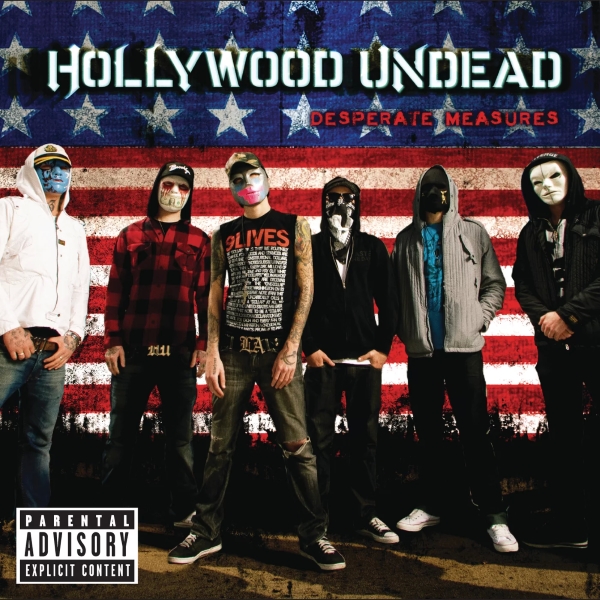 Nikki Six - Bass Guitar on "Shout at the Devil"